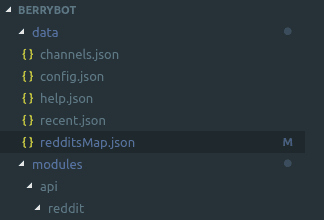 Berrybot is a side project that I work on for fun. I’ve worked on it for months now, adding features as I went along. Eventually, users in the server requested certain features that became implemented. There’s really no limit to what Discord bots can accomplish, making it an ongoing process.

See how the bot is used in the server, including reddit API functions, utility methods, and auto moderation. 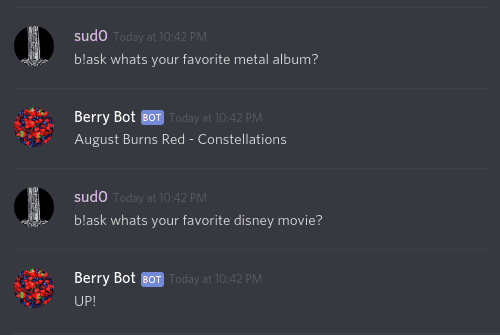 Ask a bot a random question, get a random answer back. Questions are grabbed from the AskReddit sub. 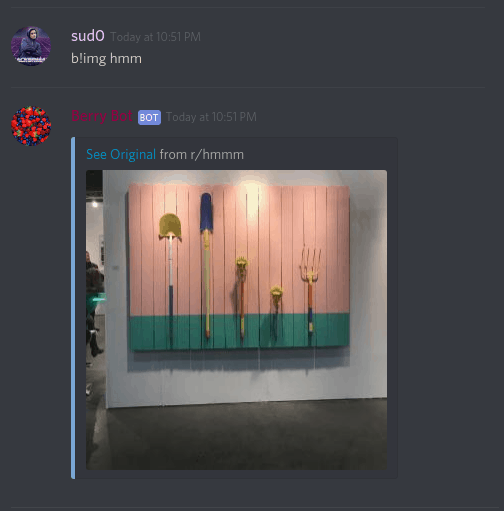 Grab a random image from the subreddit /r/hmm. There are several commands for grabbing various types of media, including images, gifs, links, and text content. Each media type is its own command and has several options for what subreddit to grab from.

The server has a counting channel. The bot will check to make sure a user doesn't count multiple times in a row, and enters a valid next number.

The bot can also query music from categories such as classical, metal, rock, indie, and so on.

Getting started with Discord bots is fairly simple. You need to hook up the discord API that’s available for your preferred language, then setup a simple starter to get it going. I found a starter script online and modified it to my needs. I started with simple commands since I was just starting to learn. Eventually I hooked up APIs and utilized Node’s power to make several types of API calls.

As data grew, I outsourced data into its own ‘component’ and did the same to group similar sets of commands. After the structure was set up, scaling up was easy since I could add commands and their logic to separate files. Moving forward, keeping code split up keeps the app maintainable without tangling logic.

Node.js
The only technology required here was Node.js/Javascript. I chose Node because I was familiar with it already, and wanted to further improve my JavaScript skills.

JavaScript libraries
I used axios to accomplish API calls. There are good utility libraries for formatting Discord messages and embeds such as discord-embed-maker.

APIs
Most of the features on this bot use the Reddit API, with a wrapper library called snoowrap. Other than that, there’s some basic APIs for grabbing quotes and other one-off functions.