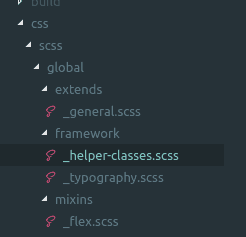 Basic SCSS starter is exactly what it sounds like, a basic way to get started with SCSS. Getting started from scratch is easy enough, but I found myself re-using similar folder structures and mixins over and over again. That’s where this project comes in. This starter aims to create a small framework, without being opinionated on styling. It’s really more of a variable, mixin, and folder structure I use to establish consistency across small to medium sized projects.

The process for starting this was out of necessity. I found myself re-writing the same gulp file for compiling SCSS and auto-prefixing, so why not just create that same file and commit it to GitHub? Now all I had to do was git clone and I was all good.

From there, I also started adding in common variable elements, such as responsive breakpoints, spacing elements, and so on. I also found it helpful to create responsive spacer elements and flex-box classes. Since I reused the same framework across many projects, I started becoming familiar with the helper classes/structure. This allowed me to get up and running quickly for future projects.

Nowadays, the stacks I use already have their own build process, so I usually only need the SCSS folder. Though, if I ever need to run my own build, the gulp file allows for ES6/babel, file splitting, auto-prefixing, and a few more goodies. The libraries used for this can be found in the ‘gulpfile.js’ file on the repo.

Other than the gulpfile, this framework is as simple as possible, and utilizes typical SCSS functions such as mixins, extends, and variables.