Reach NC Voices needed a reusable email template for their multiple campaigns. My job was to create a template from a pre-existing design and some assets. The design was a header, a variable amount of columns, and a footer that linked to their main social accounts. 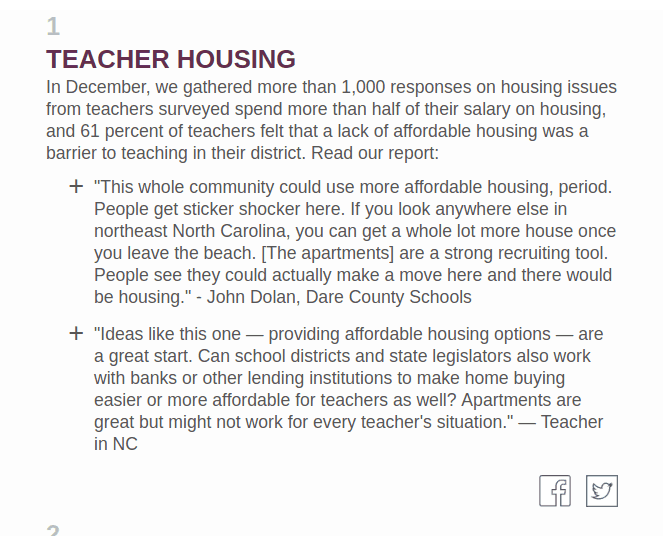 There could be any amount of columns here, so the code and design had to account for campaigns with more or less copy. 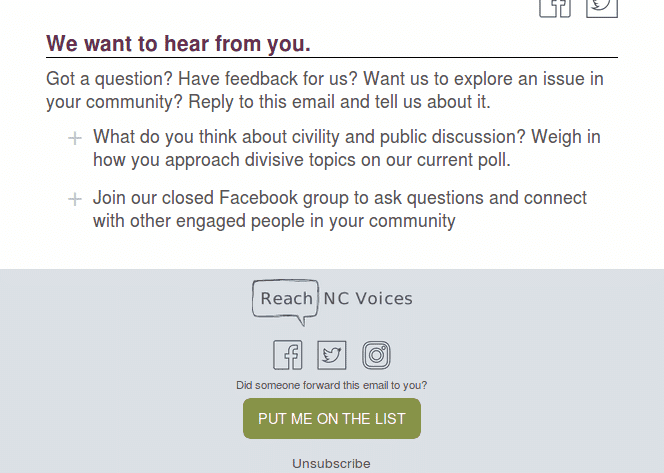 The footer at the bottom contains an editable link, and 3 buttons for social media.

The offset image is a little tricky to get right across email clients, and required a background image trick. There's also a simple link to open up the email in the browser.

The process was pretty straightforward development-wise. Get the assets, then build it out with my framework of choice. The main things I had to account for included:

The process for actually editing the content was done initially, but also fine tuned after the delivery.

For any email, most of the time was spent testing it for cross-client compatibility. The hardest one was Outlook, but I also had to test for Yahoo, Gmail, and other major email clients. For the most part, I test my templates after they are completely built out, then fine-tune from there.

Foundation for Emails
The main technology used for this project was a framework called Inky, or Foundation for Emails. Inky basically takes extremely verbose table markup and turns it into its own intuitive tags. Overall, it’s a lifesaver and I don’t think I’d touch email development without it.

Other Tech
Other tech used for this email template was basic, since not much is allowed in the first place. Inky utilizes SCSS, a gulp/webpack build, and basic knowledge of media queries.